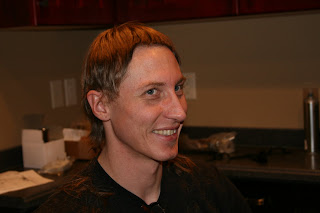 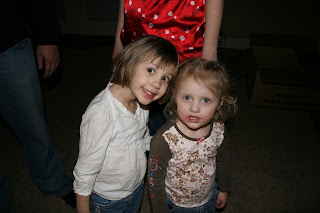 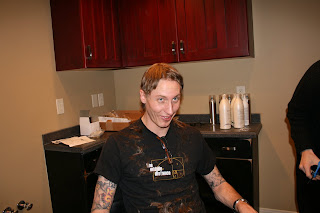 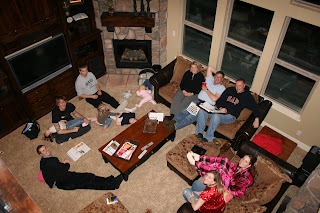 This last weekend was also a pretty nice weekend. Nothing like last weekend of going going going, but we had a nice relaxing weekend at home. We were planning on going to St. George, but decided not to at the last minute. We went to the hunting expo in Salt Lake on Saturday (if any of you know me, you would never picture me somewhere like that) but it wasn't bad. Lot's of dead, stuffed animals but it was entertaining. We went with Tyson, Skylar's younger brother and his wife Brittany. Then we went to the Olive Garden and ate. It was yummy! We seriously came home and did nothing the rest of the night but sit and watch TV. I feel like such a lazy butt when i say that, but our DVR recorder is such a great thing! We record all of our favorite shows and i can't stand watching live TV anymore cause the commercials drive me nuts! Ha Ha
We have family night with the Briggs side once a month where we all get together and have dinner and catch up on life and have a lesson. This month it was at our house and it was so much fun! I love my family so much. We had poppyseed chicken and everyone brought a side dish to share! It was Alyvia's birthday yesterday and she turned 4. We had fun just sitting around and the nedxt thing you know Jeff and John went down to my new salon and started cutting away at Jeff's hair. It was so FUNNY! I wouldn't cut it because i didn't have me normal scissors, but they decided they would do it themselves. IT WAS THE WORST HAIRCUT i have ever seen. We ended up just buzzing it all off after but I'm sure you will enjoy the pictures!
Anyway, it's Monday already and a new week begins!
Posted by Traci, Skylar, Ashlyn &Treyden at 10:16 AM

Traci, your house is so beautiful! I need to come up and see it. Sounds like your family has so much fun! I love you!

oh my gosh! I have been thinking about that haircut all week. I haven't laughed that hard in forever! Love ya! Marci

Tray, I am so glad you are doing this blog stuff again! It's nice to see what you guys are doing when we're not there!!!-Eri

It was so fun to see most of your family. The kids are all getting so big! I love your home, it is beautiful! The salon also looks like a lot of fun.