This weekend has been fun, but as always has gone by too fast. It's sunday afternoon and that means Monday is approaching too fast. But guess what the best part about that is?.... i don't dread monday because i wake up and go to my basement to do hair. it's the greatest thing ever! i feel so lucky.
We started out by doing nothing friday night which i guess i should feel lucky that we can sit around and not worry about anything. AT least that's what people with kids always tell me. "Enjoy it while you can!" So that's what we did. Then Saturday we bummed around then finally decided on a plan. Kelsie (Skylar's sister) and i were craving cafe rio (what's new), kelsie saw a dog on ksl that she really wanted and skylar has been looking at bullet bikes on ksl for the last week religiously every day searching. So, there was one on there that i actually saw first and showed it to him and neither of us could stop thinking about it. You have to understand that in the last year we have gone through 3 different bikes, and with the weather warming up skylar could not get his mind off of getting a new one. So, we all decided to go together to Provo/ Salt Lake to look at least and think about it. Well, once we saw the dog, there was no thinking about it. He is so stinking cute and such a good puppy! It makes me want one really bad, but i know that not all puppys are like that! Here he is-his name is Hurley 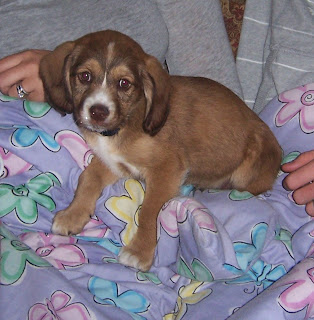 So that's the dog story, well next came the bullet bike. We pull up to the house and it was over the second that skylar looked at it. Then he rode it and there was no getting him off of it. and he looked really good too. ha ha
So this is his one from last year- good lookin right? 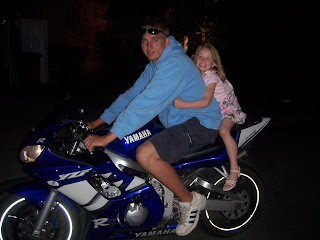 And now-the new and improved 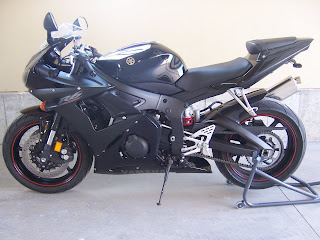 So-that was that- we have a new addition and my husband is obsessed! 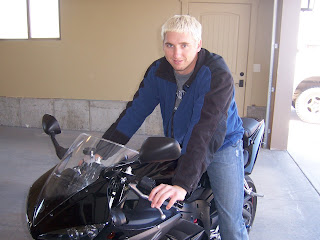 he's so cute!
I hope that everyone had a good weekend!

Traci, all I can say is....TROUBLE! Just kidding! I think it looks fun to own a sweet bike like that. However, we are old lazy folks and have our eyes set on a camping trailer now! Love ya, -Eri

That is a great looking bike. Bullet bikes have always scared me. Spencer, one day would like a bike and I'm hoping he goes for a Harley looking bike and that he never drives it on the highway.

Women are you crazy! Ha ha you are so brave to let him get a bullet bike. I would be scared to death. It does look fun though. I hope he is safe. Anyway I really am going to come see your house soon.

You guys make me laugh! First you get one, then you get a different, then a new colored one, now this! I must say... it is pretty sexy!